Get fresh music recommendations delivered to your inbox every Friday.

Report From the Occupied Territories 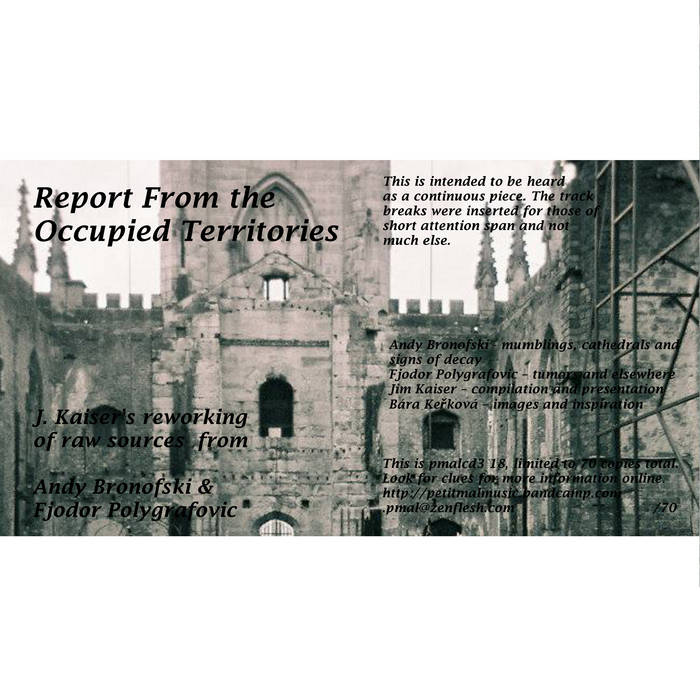 In a haze of violence and stupidity, two people set upon the task of documenting a time spent exploring something new within a familiar framework. Herein lies the result: a bombed-out cathedral, the busses that lead to and far away from it, trains, trams and taxis between, an old carousel, townsfolk carrying on, bells pealing in the distance, a bar-room full of strangers chattering, and insomniac words up close and less than cogent. These mix with raw recordings of a tumor spitting vitriol, rain and sick technology. This makes up a near complete listing of the sources of audio presented in this limited edition 3” cd-r.
The slowly burning cities of London, Berlin, Liverpool, Oakland, those within reach but not quite attainable, and still the internal sounds of a newly found tumor, provide the geography of this release. Sound sent to Petit Mal Music by Soudruh and Soudruzka alike, this should prove to be an accurate document of time spent in troubled waters and unsure lands, in a short span of blissful wandering.
With many hours spent translating and deciphering these raw sources, Petit Mal Music is finally able to present these documents of times and spaces into a coherent whole. Nothing may remain the same after this. Things change, perspectives and stimuli alike. What was given has been processed, and what so ever may come in the future remains in said future, should that exist. We as always, wish for the best.

Follow us if you will, into this uncharted land.
weshallallloveyouandy.tumblr.com

This site is to document the evolution of "band" to "label", as I had for 15 years performed and recorded solo material under the "petit mal" moniker. In 2008, a series of 3" cds was begun to release my own and related material. Since then, the relations are expanding and I've dropped the solo moniker in favor of my own name. This is now a home for unreleased live recordings, archives and 3" cds. ... more

Bandcamp Daily  your guide to the world of Bandcamp